skip to main | skip to sidebar

Just ten minutes away from our tranquil little suburb, with wooden houses covering the hills and where church bells ring down in the valley on Sunday mornings, is the harbour and the CBD. Every time we drive into the city, we drive along the Wellington faultline, and most of the time we don’t give it a thought.

But every so often the earth moves. And every single Wellingtonian wonders if this time it will be “the big one.” After all, evidence of Wellington’s dramatic and at times violent geology is hard to miss: an earthquake raised the land that is now the city’s airport; the motorway northeast along the harbour tracks the faultline. 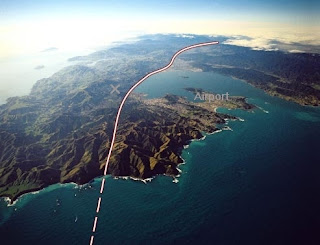 If you have ever seen the movie “LA Story” there is a scene where an earthquake occurs when the main characters are at a restaurant. The LA natives continue eating as the earth shakes, the table rattles, cutlery is juddered across the table, pretending that absolutely nothing is wrong. That scene is very familiar to Wellingtonians, who are generally very blasé about earthquakes. Outwardly at least. I have worked with civil engineers, who stand by the windows taking an unnatural interest in how high-rise buildings around them behave (do they sway as intended etc?) during an earthquake.

I grew up in a part of the country with the lowest incidence of earthquakes, and spent my first 23 years in blissful ignorance of what it means to live on an earthquake faultline. But moving to Wellington I was horrified to be reminded of this on a daily basis – the public department where I worked had “what to do in an earthquake” posters everywhere! Like most Wellingtonians, we have emergency earthquake supplies. Bottles filled with water, cans of food, torches and candles, a red cross medical kit. We live in wooden houses – they move in earthquakes and are less likely to suffer structural damage – on the side of a hill. We joke that when the earthquake comes, we won’t need our own emergency kit but hope that the people in the houses under us at the bottom of the valley have enough to share, as that is where we will end up.

But fear does come when the ground shakes beneath us.

I have often wondered what it must be like to live in the US tornado belt, and can’t understand why people would choose to live with the constant knowledge they could be destroyed by nature’s power. But I live on a faultline. I don’t get even a warning if an earthquake is about to destroy me. How reckless is that?

The “big one” is overdue, but in geological terms it could come now, or in a few hundred years. So, like my husband and his family, neighbours, friends and colleagues - even the Prime Minister whose official residence is adjacent to the fault - I adopt the head in the sand approach, and hope it won’t come just yet.

Mali
Self-employed Kiwi, with a husband no kids, who loves to travel, read and write.